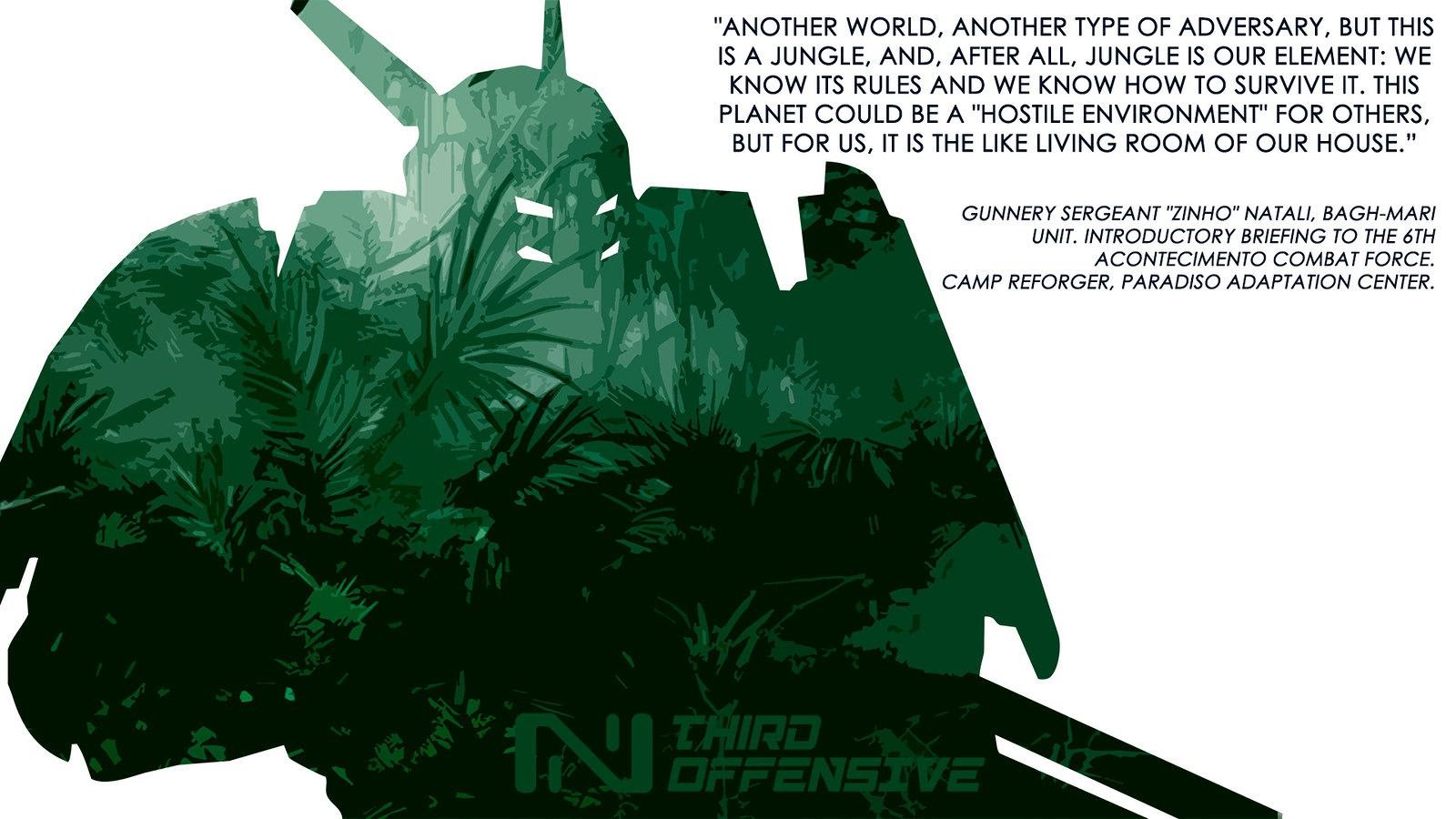 This was a spontaneous round. Lists were made before armies played and mission were set. We chose the mission randomly. Hence, the lists are not optimized. Altogether the setup was in my favor.

I won the initiative roll and decided to take deployment as I had bad experience with taking initiative lately.

Recently, I started a new project: Collecting a Shock Army of Acontecimento Force. Sounds weird as most of the miniatures are OOP anyway, but I got one of the remaining Scylla & Drakios Packs and the remaining Aleph minis were present anyways. I guess I will have to do quite some modeling or greenstuffing myself, but this somewhat excites me pretty much. So this was actually my first game with SAA and I guess most of my list consists of staples. A single Naga as I missed points for two, a link featuring a bagh mari HMG with some regular all-stars, two peacemakers for main defense as my opponent might get trouble trough the midfield and the doc/engi combo if anything doesn‘t work as intended.

The two models that I really wanted to try were Scylla with the EVO hacking device (and just one bot, as I field a lot of remotes anyway) as I think this is the sectorial where she can really shine with it (apart from vanilla Aleph). Being able to buff peacemakers or a bulleteer to go on rampage or help AD troops to get where they want is pretty good and you can easily get enough orders such that using support ware doesn‘t actually hurt.

The other one which I was more skeptical about is Kirpal Singh. I already considered getting into SAA during N3, but at that time I disregarded Akalis and Kirpal Singh. I still believe that Akalis are the weakest AD option in all factions. Compared to Tiger soldiers, Ekromoi, Garuda or Ragiks they don‘t really have something outstanding except maybe the EM CCW which they can hardly use … except for Kirpal. Moreover with better access to an EVO and the addition of NCO and the overall changes to AD he seems like a solid choice esp. for crippling hackable targets due to EM.

My opponent played a list pretty much centered around the guijia/tai sheng duo. Zhencha, Liu Xing and Tai Sheng also projected a guided rocket threat. An additional attack vector was added via using an Rui Shi although missing smoke. 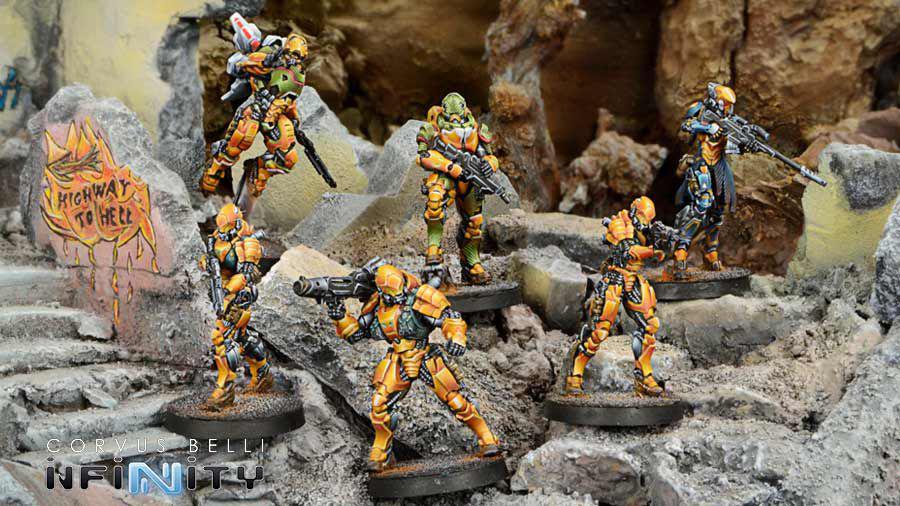 I chose blue side mainly as the green console was easier accessible from that side. I could not see any advantageous fire lanes. My opponent deploys pretty compact and holds the Guijia back. I recognized a lot of points missing and expected it to show up. Note, everything except for the Husong,the Chaiyi and the Guijia were prone.

I spread the peacemakers in the midfield to give the power armor a hard time advacing and decided to put the link prone on a central roof, which I could leave walking into the midfield. The other parts of my army where evenly distributed to have a specialist or two close to every console. Later I recognized that the engineer was poorly deployed as he wasn’t able to help the bots later on. I believe Scylla was my reserve and went some spot that wasn’t guarded by any means, as there where only nine orders of invincibles on the board.

Note: In the picture below I marked the auxbots with red borders.

My first goal was to get rid of the TR bot. Hence, I reshuffled the link as I feared the ML/sensor regular could be to far from the HMG and in a second order gave the Bagh Mari a try. Sadly, two wound were not enough to shoot it to scraps. The nasty thing went unconscious right next to the engineer. Next, I used a coordinated order in group two to advance Scylla, a Peacemaker and the doc into the midfield, while the pathfinder went for the camo token. Here, I forgot that troops with peripherals may not join in coordinated orders, oh well. We figured that in round three, but I think it did not change the game essentially. The Pathfinder got a second order to sensor sweep the token. The discovered Zhencha was standing in the Pathfinder’s repeater area, so I decided to advance the link and cripple the zhencha. For some reason I went with Oblivion first and then decided to carbonite him as well. Then, Scylla started assisting the Bulleteer’s firepower and the remote had an easy job with the zhencha. After that it also hit the Chaiyi, but the FP bot was saved by armor and fled into total cover. With just a single order in each combat group I made the Bulleteer retreat a bit and the Pathfinder took position at the Zhencha’s place.

This was the moment where we figured out that I had quite a hacking network already thanks to all the bots. Afraid of more Bulleteer rampage my opponent made his Liu Xing enter the table from the south edge. The Bagh Mari’s Vision (he was prone) was blocked by the advertisement and the Peacemaker, while peacemaker and Auxbot were looking towards the opponents DZ. Then the Liu Xing cautiously approached the Bulleteer such that he was in template range but not inside the repeater network (screw you, 8.3 inch template). The poor remote stood no chance. Next, the Pathfinder was dropped by the bullets of the boarding shotgun. Then, the Liu Xing retreated into Cover.

Now, it was tactical armor geared time. With the lieutenant’s orders the bulky dude got into position for the Bagh Mari whose base was almost covered by the boxes, I haven’t seen that, oh well. But my fear was unnecessary as the Tiger Hunter didn’t mean to die to the Guijia’s firepower. Instead the TAG suffered a wound. Running out of orders the duo hardly found cover. No chance for the engineer to do his duty.

Now, it was the Bagh Mari’s turn to show the Guijia how an HMG is used properly. The proud of the state empire stood barely a chance in the gunfight and lucky for me, seem to be made of aluminium. After two salves the TAG was unconscious. Then, I wanted to handle the nasty Liu Xing. I thought it might be a clever idea to move a peacemaker close and give Scylla something to feed on. I didn’t think about Oblivion shutting down repeaters. Oh well. At least, he was guarded… The other Peacemaker went straight for the unconscious Guijia to finish it off.

Finally, I advanced my troops towards the objectives and dropped a fast panda close to my opponents DZ (green circle in below picture). Retrospective the link’s positioning was awful… I had gotten careless.

With the “great” firepower of the Guijia it had to be the Rui Shi to preserve some honor for the state empire. The remote started with taking down the Peacemaker in his half. Bad positioning … Then, the hacker was assasinated and the Bagh Mari was up next as an act of revenge. Finally the mine layer got shot from the Rui Shi in the Fastpanda’s area. But here I learned that projecting a heavy repeater network doesn’t help without someone who can actually hack. Damn…

The remaining orders were used to bring the Husong back to mecha-life, the Son-Bae to stand up and Tai Sheng taking away the blue supplies before the Naga could take them. The poor fellow was too afraid to ARO.

Now, I was forced to get my fingers on some supply boxes. I figured that the Naga should be able to get the green one pretty safe. But first, the isolated peacemaker took his revenge. The poor Liu Xong learned his lesson that even isolated remotes can move and shoot. Then, the Naga advanced with a lot of luck as Son Bae and Tai Sheng were not able to discover her. The Husong who had waited for the Naga to shoot tried to discover before the Naga would vanish behind the buildings close to the green supply box while Tai Sheng decided to dodge. That Gave the Naga the chance to take down the TR bot and finally getting her hand on the supply box which allowed Tai Sheng to dodge again, something I hadn’t calculated in.

At first I thought this might cost me the game, but then I remembered that someone was still missing. It was time for Kirpal Singh to enter the battles. For some reason I wanted to get him deal with Tai Sheng up close, so he moved very close, shot her in the back once and then – giving Son Bae and Chaiyi a shot at him – struck down poor Tai Sheng in CC. Luckily the wasn’t hit by the bots. I think the state empire needs better quality control for their warfare material. As the only specialist remaining from IA was the engineer I coordinated my remaining troops to give him a hard time. This gave the Son Bae again a shot on the regulars, but he failed again. Oh, dear…

My opponent decided that the engineer didn’t have a chance, with just 5 orders to go. So the decided to give the Rui Shi to make it a draw. The remote rushed forward and got shot by my engineer. At this point he decided to retreat. Ending in

Somewhere I read that Acontecimento played rather like Nomads than like Panoceania. I can imagine this is true. As a fun fact: There were more hackers in my list than troops with BS>12. Hacking is really a thing for SAA and the core Link options (Regulars, Bagh Mari, Orcs) offer quite some toolboxiness. That’s why I decided to call SAA the “Nomads wearing blue” for now. It is a really interesting army to play and I look forward to try and get an army that looks like SAA although the miniatures are OOP.

The game was really entertaining and fun, but in the end I was downright lucky – Bagh Mari taking down Guijia, YJ remotes continue to miss, Tai Sheng running where I need her to be… – but this is part of every victory in Infinity I guess. On the other hand I did a lot of bad positioning and will have to improve there. My opponent had fun as well and didn’t get frustrated by the dice (at least he was sportsman enough not to show).

I was happy with pretty much all the troops in my list. Scylla didn’t have the chance to shine, but it’s not the killer hacker’s fault if there is no hacker to feed on. At least she projected a huge threat to the Liu Xing and held her position. Kirpal Singh on the other hand totally delivered. I checked on every turn whether there was a proper place to bring him but the compact deployment of the invincibles didn’t offer anything. So he lurked in the sky for his moment and took his opportunity. Still I’d love him to have some better gun.

One thought on “Battlereport (SAA vs. IA)”