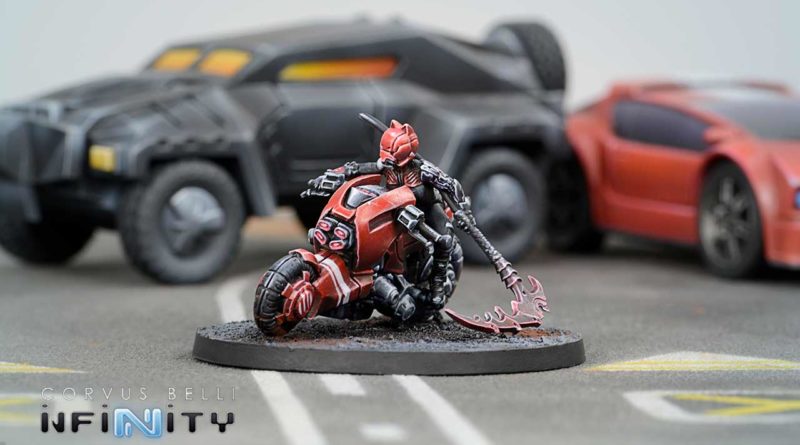 I know I’m cheating a bit here, because JSA isn’t a sectorial anymore, but I think this list fits the spirit of the challenge. I’ve taken all six motorcycles and all three Tankos, giving me a list with all nine of the impetuous orders available to JSA! I felt confident taking this list into Unmasking because the large central exclusion zone would mean that the motorcycles could easily get around the board to tag objectives and kill HVTs.

I (JSA) won the Lieutenant roll, so I took 2nd Deployment. With such a fast, aggressive list, I wanted to exploit holes in the enemy deployment, so making my opponent deploy first would ensure she would have to spread out her ARO pieces, and I could avoid any visible MSV pieces.

Nomads deployed with their Kriza Boracs and the Überfallkommandos looking to push down the two center lanes,the Zondnautica poised to advance down their left flank, and Jazz and Billie waiting in the wings on the right.

Because I was going second, I wanted to deploy as many of my motorcycles in as much cover as possible to keep them safe until my turn. For Kuroshi and Yojimbo, I positioned them farther back, with the hope that if they moved and used smoke for their impetuous orders, the smoke throw/shot wouldn’t be a F2F roll. The Tankos were placed so they could ARO to slow down advances across most of the board. Finally, my Keisotsu/Kempei were deployed defensively as a Core link to protect the Kempei for when Chain of Command kicked in, and to make sure a Carlota Kowalski would have a hard time dropping into my back lines and destroying my order pool. (I know we weren’t supposed to bring a Core, but I don’t think 62 points of Combi Rifle is really what you were trying to prevent.)

With the Tanko missile launchers threatening so much of the table, and so many units clumped up and susceptible to a nasty blast template, the only good starting play for Nomads was to push forward with the Kriza and try to take out the Tankos one by one. Pushing forward down the path to her right, the Kriza wounded the Tanko in front of her and forced them to drop prone, and then moved up and killed the Tanko sitting on top of the tower. With only a couple orders left in the pool, and not wanting to leave her Lieutenant in danger in the center of the map, Melanie pulled the Kriza back and placed her into Suppressive Fire.

Tanko threat taken care of, the Zondnautica zipped up the board and activated the first console, uncovering the first decoy HVT. A few more troops moved up the board, and then the turn was over.

Now it’s time for my Impetuous troops to shine. Despite losing one Tanko, I still had eight impetuous orders, thirteen regular orders, and an irregular order for my turn! The Kriza in suppressive fire made my left side of the table essentially off limits, but without any dedicated ARO pieces on my right to slow me down, the biker gang charged forward, using smoke to cover their advance.

The Zondnautica in the center of the board was my first speedbump, so I pushed up with a boarding shotgun Aragoto to clear the path. Unfortunately for me, they make motorcycles out of magic space metal up in the Nomad ships, and the Zond took eight shots (with several crits!) just to knock unconscious!

While my bullets bounced off the Zond’s armor, a Zero behind a wall had been dropping mines as well! With Π-Well guarding the Zero’s flanks and three mines now littering the road, the intersection was going to be impossible to get through safely. Committing to a suicide run to try to assassinate Π-Well, the boarding shotgun Aragoto charged forward, setting off all three mines, and dropping her two shotgun templates on Π-Well… who dodged them no problem.

Essentially out of orders in my first pool, I started activating my more offensive group. My spitfire Aragoto killed Zoe, and then got knocked unconscious from an extremely lucky shot from the Zero hanging out in the center. Yojimbo had most of my remaining orders at this point, so he threw smoke next to the Zero and drove up and killed her in close combat. A move and a dodge after that, Yojimbo was in CC with Π-Well and cut it down to size for my last order.

Yojimbo in the Nomad back lines was a major emergency that required an immediate response, and the Kriza’s heavy pistol provided a quick answer. Following up, a Prowler came out of hidden deployment on the Nomad’s right side of the board, took down the Aragoto hacker in front of her, and proceeded to tag a console, unmasking my Designated Target!

The Prowler advanced to my Designated Target and finished her off, falling to a Tanko missile in the process. Unfortunately for the Nomads, the deaths on their side had left them without too many orders, so that was the end of the turn.

With no enemies in the way, I was able to move forward with my Aragoto hacker and activate the first console, revealing a decoy HVT! Because there was no one useful left in my second order pool, and only a few orders left in the first, I decided to spend Command Tokens to hop Kuroshi and my last Aragoto into the other pool as they ran out of orders. Kuroshi spotted a path through the weakened Nomad lines, and decided it was her time to do some serious damage! Snaking around the back, Kuroshi killed the decoy HVT and followed that up by slapping a D-Charge onto the Kriza’s back, taking her down! In this maneuver, she ate a bullet from an Alguacil and went Dogged (who she shot back right after!)

The Aragoto hacker followed this up by tagging another console, revealing the designated target! On borrowed time anyway, Kuroshi charged to the target to perform a suicide assassination, killing the target before dying to a shotgun!

In both Retreat and Loss of Lieutenant, and with only a single specialist in the back on the table, there was no longer a path to victory for the Nomads, and Melanie conceded.

This was a good game, and also a really fun game! With impetuous, 8-6 MOV (20-15 in metric), two smoke users, and big dodge distance bonuses, the motorcycles were able to come in to attack anywhere the opponent’s defenses seemed weak. I am in love with the JSA bikes in N4, and never regretted having six! (I just wish there was a paramedic biker!) I suspect they would be weaker against a list/army with more MSV, but even in that case, they have so much flanking potential and so many template weapons, I imagine they could still manage to trade up most of the time.

The more I play Kuroshi as my lieutenant, the more I appreciate her for that role. She’s a specialist, can shoot smoke, a good enough shooter, and her D-Charges make her very dangerous in CC, so she never seems to be at a loss for what to do.

The Tanko missiles did their job, but weren’t the stars of the show. One was probably enough as an ARO piece, and if I had switched one out for a Keisotsu missile in the Core link, I think it may have been a more threatening ARO piece, while also freeing up some points. Then again, maybe three would have been more necessary if I’d deployed first and gone first, so they could clear enemies out with their impetuous missiles!

For improvements I could have made, not having a specialist biker in my second group was an obvious mistake I noticed very quickly once I started playing. I was also overly cautious in my deployment, and should have positioned my Keisotsu paramedics farther forward, so they could have revived bikers if needed. Finally, I noticed my bikes got too spread out left to right on the table. They did extremely well when moving as a pack, but the one that split off to the left ended up being very useless.

All in all, JSA motorcycles keep performing extremely well for me, and with their low price point and great kits, it’s going to be hard for me to run less than three or four in most of my JSA lists going forward! I’ve spent some time after the game thinking about bringing a Guided Missile bot, and using the Aragoto hackers to spotlight enemies from weird angles. I think that might be my next list! Best of all, the motorcycles are incredibly fun to play and make for some amazingly cinematic moments!