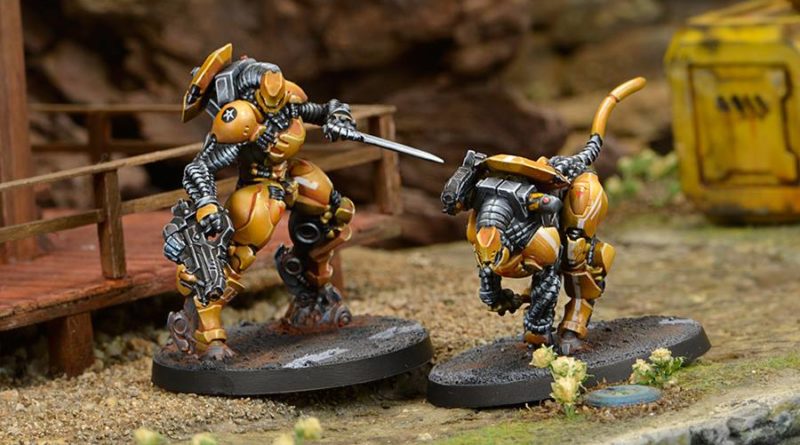 I decided to try out a maxed ISS list with all the Su-Jians. I’ve never heard of using three of them and this Academy mission seemed like the perfect opportunity.  I loaded up on Kuang Shi order batteries and rounded out the list as best I could with a sensor bot, Xi Zhuang for some madtrapping and specialist work, and a Zhanying lieutenant.

Nomads decided to try a different tactic to the hacking game by loading up on all the various hack options (killers to thwart hackers, regular hackers to tear down my hackable units, and an EVO for further support and disruption). To back all those nerds up, he added in several pitcher options to get repeaters where he wants them. Those nerds need some protection so he brought in two snipers and a light TAG beatstick.

Activating second, Nomads decided to hide most of their units behind cover except the Zero sniper on the right-side building and the Grenzer sniper on the left. The Smoke templates were the Zero-G terrain obstacles we had to place out before deployment.

Being able to counter deploy my army and going first with a bunch murder kitties at my side was too big of an opportunity to pass up. I lined most of my force on the starting line at the edge of my deployment. ISS has very few ways to deploy in the midfield so I knew I’d want to get everyone as far up as possible.

Looking at my options, I knew I wanted the Su-Jian Duo to go through the center, pick up the beacon, and then split with one staying behind to wreak as much havoc as possible before dying and the other getting back to my side with the beacon in tow. Three units were blocking this option, the Grenzer sniper, the camo guy on top of the building and the Gecko TAG waiting just around the edge of the beacon.

Hoping to draw out the camo unit, I started my Kuang Shi running out in the open. Any that survived would take up positions to guard my beacon and watch the board edges in case a parachutist decided to drop in. The ploy worked and the camo revealed to be a Zero sniper. He easily dropped the first Kuang Shi that came into view.

With the camo now exposed, I figured Lunah would be able to counter sniper him but the Grenzer was an issue if I tried that so I sent the lone Su-Jian hunting. Due to some good terrain blocking, the Su-Jian was able to get to under 16″ of the Grenzer before being shot at. I opened up with my Spitfire and a lucky whiff by the Grenzer had him eat 4 hits. He almost blocked it but one of them got through and dropped him unconscious.

With the Grenzer neutralized, Lunah revealed herself and devastated the Zero with two viral sniper hits. The Zero tanked nothing and was easily removed. My Su-Jian Duo were able to now run up the field but a small terrain gap had the Zondnautica deciding to take a shot. Even though my kitties were in mobile form, I decided to shoot back. The Spitfire reigned king again and obliterated the Zondnautica.

With nothing left in the way, the Duo worked up to the beacon to find their Boss Fight. Due to terrain again, I had my Heavy Shotgun Su-Jian take point and get within 8 inches of the Gecko before engaging. Trading blasts, I worked at the TAG while facing off against multiple Panzerfaust shots. I was slowly chipping away at the brute but it was eating more orders than I had hoped. With the Gecko out of Panzerfaust shots, I ate an attack to have the other Su-Jian pick up the beacon. The Duo then split, with the Heavy Shotgun kitty staying behind to finish off the Gecko.

Failing one of his guts checks, the Gecko maneuvered behind the trailer but forgot to change his facing, allowing me to run my kitty in mobile form and throw down three blasts from the Heavy Shotgun. This finally dropped the TAG to Unconscious.

I could have left the TAG at this point but I wasn’t sure what revival options the Nomads had and I couldn’t risk it getting back up again. I engaged to Coup de Grace (also because it was my classified objective). In the process, Mary Problems threw a pitcher down right behind me. I didn’t want to risk getting hacked so I left the Su-Jian in their backfield for the Nomads to burn orders on during their turn. I got the beacon Su-Jian back into my half of the board and in cover with the remaining orders from that group.

I still had orders to burn and my lone wolf cat still had some murder left in her. I ran her around the edge to flank some more nerds. This time I took down a Moderator and the Zondbot/Interventor that were hiding. The main goal was knocking out that Zondbot so the Daktari couldn’t patch up the Grenzer. My orders spent and 6 figures down (including all the Nomad’s potent attack pieces), I called it a day and let Nomads deal with these jerks.

Trying to salvage things and put pressure on my side of the board, Nomads brought in a kitty of their own- the Tomcat Engineer along with the Zondcat. Unfortunately, I didn’t leave any good spot to land and he was immediately fired upon by the Sensor bot and went down. The Zoncat decided to try to land behind the shotgun Su-Jian I left behind, hoping I’d turnaround but instead I dodged successfully and rushed over to Mary Problems

This was brutal as it got me into blast range and as she Isolated me, I took her down with a shotgun blast. In a hail Mary pass, the Daktari leapt over the crates to try and revive her fallen comrade. But Kitty’s middle name is Murder. Or its first name is Murder. Doesn’t matter. It starts with a ‘mur’ and ends with everyone screaming. Including the doc this time.

With a bunch of Moderators left, the nerds put down their laptops and, using a command token, focused fire on the isolated kitty. Being completely unscathed, I decide to keep the party going and blast the closest Moderator. In a hilarious set of rolls, all four combi shots hit and the Su-Jian failed all four armor saves to become a steam pile of scrap. The shotgun blast was also blocked so all-in-all a pretty sad ending for such a lethal weapon.

Attempts to get rid of my other Su-Jian in their midst failed asI learned to dodge again and go on the run. This kitty is pretty banged up, only able to take one more hit before dropping. Nomads have nothing left and cede the turn.

I start off realizing that the Nomads are probably already in retreat after the mauling they received throughout turn 1 so I just blow through orders, getting my beacon up to the highest roof. I set up the wounded Su-Jian to cover the other beacon with suppressive fire “just in case” and turn it over to the Nomads.

As predicted, the Nomads were in retreat. With nothing else to do, they ran from the field.

With two rounds holding the Beacon and my classified objective complete, that gave ISS a 5 – 0 score and total victory for the mighty Yu Jing Empire.

Taking max Murder Kitties was definitely an interesting option. I really didn’t think it would work against Nomads as I figured they’d get hacked and I’d have no way to get them back. I had some hot dice in the opening salvos but I think this game was really lost before the first order was flipped. By electing to go second with no established midfield deployables to leverage their hacking game, Nomads left themselves wide open for the Su-Jian Tsunami. As was evident, the army wasn’t going to outgun them. The Su-Jian are too good at using their speed and skills to pick the most favorable engagements.

While I prefer to go second on any mission that determines points at the end of a turn or game, looking at this match up, Nomads needed to go first. With so many pitchers and deployable repeaters, they needed to litter the field with a dense repeater nest that would slow down my advance or funnel the kitties into less favorable firefights.

Regarding the use of three Su-Jians in an army, it does seem legit but it will be highly dependent on the mission and I think it sets itself up for some very bad match-ups. While the Nomad list could be a bit tighter (the EVO in there was all but useless), if it could have put up a good net, it would have been a much harder game to get through with so much of my force riding on the power of those hackable Su-Jians. I can definitely see using two as a duo or as flankers going well.