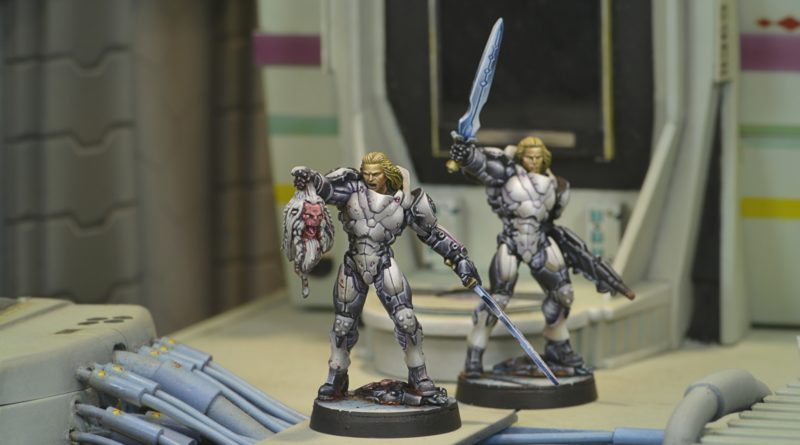 Pretty simple list. I’m doing the “max AVA” bromad academy mission, but with impetuous Aleph troops (not *exactly* what the mission called for, but I think it still counts). So I brought all 4 of them: Eudoros, Ajax, Hippolyta, and Penthesilea. I take Eudoros quite frequently, I like impetuous smoke. Hippolyta I’ll take if I want another impetuous smoker, but Penny and Ajax almost never make my lists. So it was fun to have them, although I don’t think Ajax really adds anything to the party, especially since I was taking the one without Forward Deployment (+8”). Achilles is there to beat people down with his AP Spitfire (the main reason I take the Hoplite Armor is for the AP, but the extra armor and the Forward Deployment is nice). Parvati is there to keep everyone going, and the Deva Spec-Ops (with Doctor, Breaker Pistol, Hacking Device and 9 BTS) is a backup for her. In hindsight, probably should’ve taken Engineer instead of Doctor and Breaker Pistol since Parvati has STR instead of W. Oh well. And then some filler: 2 Netrods and a Liberto. I specifically took an LI list, so Coordinated Orders would move a larger percentage of my points out of the zone.

He had a lot of MSV in his list (2x Nokk, Black Friar, and his Spec-Ops all had it). I’m not sure whether this was to counter Aleph’s ubiquitous mimetism, or to lean into the low visibility zone (all the brown, roughly half the table, was low vis, difficult terrain). Either way, it definitely did some work. Joan of Arc, with her free coordinated orders, and the Motorcycle Knight both seem like good options to get outta the BTV, and he had a lot of Forward Deployment to try and help with that. His Spec-Ops had Drop Bears, Feuerbach, MSV1, and BS 13.

As you can see, I stacked all of my guys more or less in the same corridor. This is definitely not recommended, but they were relatively safe, since there were no sight lines until he got 8” out of his deployment zone. Everyone ended up prone except Ajax, who I was using to block line of sight to Eudoros in the back, in case he did end up getting a line I didn’t see I could smoke up the group and not waste their impetuous orders.

He spread his forces out much more, which I think was a good idea. He failed all of his Forward Deployment rolls except for on Liang Kai. His Montessa is as forward as possible, and in an area I’m not covering at all, so he’s hoping to run out of the BTV asap. Sierra, Black Friar, and Warcor are all looking down the hall at the left and the opening to their right, in the center of the map. The two likely routes for me to engage in. Joan is tucked safe in the back, but with a quick route to the center of the table, where she’ll want to be.

My reserve was Achilles, who just went right in the group of people behind Penny, while his was the shiny new Sepulchre knight, who went behind the rocks next to the Nokk on his right.

He started off draining my order pool by 2, so I was down to 7 regular orders, and the irregular on the Liberto. There did end up being a line from the Spec-Ops through the middle room into the corridor, so Hippolyta went first and smoked that up. After that, everyone was free to run up the middle, as planned. I spent a couple of orders getting Parvati smoke as well, and used a couple coordinated orders to move everyone up the board. Achilles ended up ready to start shooting the Sierra unconscious, the Black Friar dead, with a bullet bouncing off of the Warcor.

I ended up spending the rest of my Command Tokens on Coordinated Orders and converting the Libertos order to get people out of the BTV zone, and spent my Lt order getting Achilles into Suppressive. My Libertos and Hippolyta tanked the save, and the Netrod ended up unconscious.

I was real worried passing over the turn. This is a terrible position to be in, with my entire list all in mostly one room. Fish in a barrel. I was just hoping he had to worry about the BTV more than shooting my guys.

His impetuous buddies charged forward, prompting Hippolyta to dodge prone. Then he moved a bunch of his units up, and tried bringing his TR bot up with his Monstrucker. Rolled a 20, command token to reroll. 18. I tell him to let it go 20. I beg him to stop… and he rolled an 8, so he got it up, completing a classified, but now he was completely out of command tokens. Great for me, but a definite mistake on his part. That is 9 orders he could’ve saved with Coordinated Orders.
His biker moved towards the central room, getting shots off at Hippolyta and Parvati, who luckily smoked and dodged, respectively. He moved his Nokk in the compound, which was worrying, since it had a template. I, again luckily, got Penny into b2b with his Nokk by dodging. He moved up his TR bot, and did a Wound to Parvati. Then the BTV happened.
Techbee, Helot, TR bot, Monstrucker, his Spec Ops, and his Warcor all ended up unconscious.

Between his bad luck, and my good luck, I was in a phenomenal position at the start of Turn 2. I was down a Netrod. During my impetuous orders, Achilles did 2 damage to Joan, and everyone else moved up. I discovered that Hippolyta shooting at the Nokk was a bad idea. With Mimetism (-6), in a Low Vis Zone, bad range and cover, I was on 1s, while his MSV1 cut through the Low vis and half of my Mimetism.

Achilles then finished off Joan and the Nokk on the right that tanked 2 CC Attacks from Penny earlier. He then swung around and Coup de Graced a couple more models to complete Predator (remember, Coup de Grace counts for it now) with the extra +1 Objective point. Hippolyta moved forward, tanking a crit from the Nokk, and Liberto moved up a bit.
BTV took out the Liberto.

He was down to 4 troopers but, surprisingly to me, was not in Loss of Lieutenant. That’s how I learned that the new Sepulchre knight has a Chain of Command profile! During his impetuous, the Knight on a Bike took some shots at Hippolyta, but she spiked down some smoke. He then used the Montessa to complete another classified and Coup de Grace my Liberto while entering the central room from my side of the table. His last order he shocked my Deva Spec-Ops off the table, and missed his shots at Parvati. 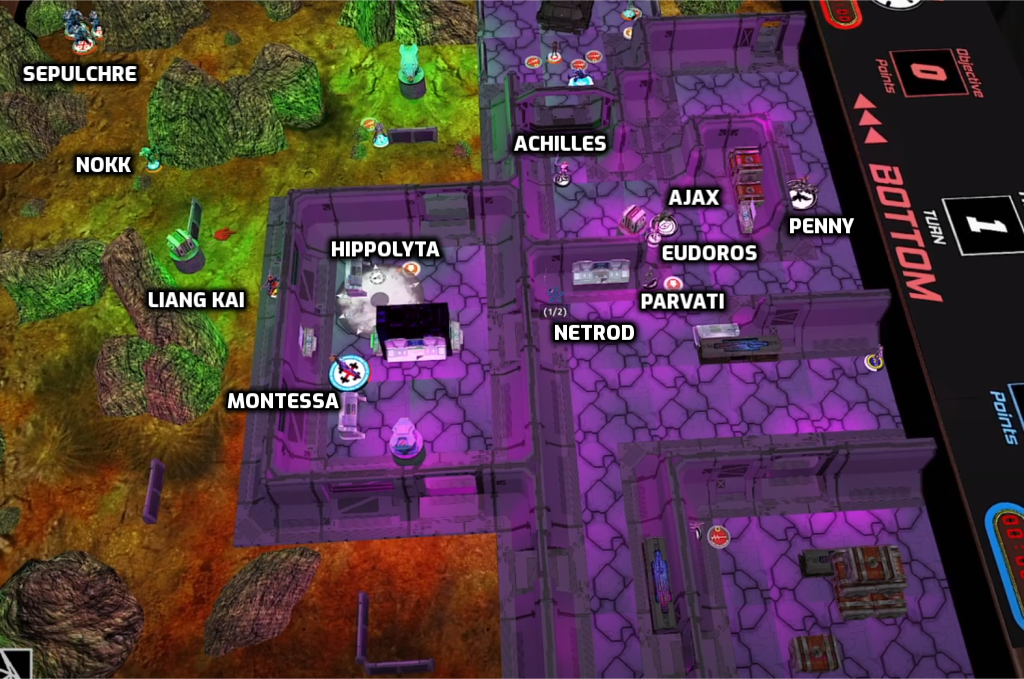 Achilles had 8 orders to work with, including Lt, so he cleared out the biker knight who had eyes on Parvati. After 4 orders, the biker went down, and Parvati went to map some boxes off to the right. Now that I’m typing this, I’m realizing that Mapping requires something in their deployment zone, and not their table half. Whoops. That’s a particularly hard and risky objective for BTV. Achilles then took out Liang Kai. He only had Sepulcre and Nokk left.

He didn’t want to risk losing more army points, so he didn’t take any fights, and called the game.

So this ended up being a
10-3 victory for Aleph.

I won largely because he used all of his command tokens on trying to bring up his TR bot. If he had had more orders on his second turn, he could’ve done so much more damage, and I would’ve had to spend orders on my second turn trying to take them down. He still did a lot of work with only 4 orders on his second turn, doing a classified and taking out my Spec-Ops.
Hippolyta was in a real risky position, for not really any gain. It didn’t bite me at all, because she won her roll offs or tanked the hits, and soaked up orders doing it.
As far as taking “max AVA” of impetuous guys, it really helped on this mission in particular, and this map had a relatively safe lane for them to traverse. It did lead me to bunching up my guys, which could’ve been disastrous, but it worked out this time. I could see, in a different mission/map, having Eudoros and Hippolyta laying down smoke for Ajax and Penny on different parts of the board. I’ll have to try it again sometime.

One thought on “Smoke ‘em if you got ‘em”