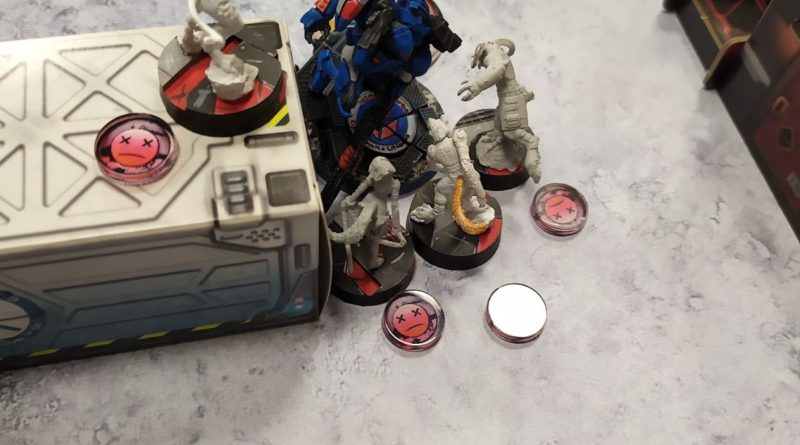 So it was a demonstration game and coincidentally (really, I later realised that it actually fits the mission objective) I chose to go with the 20×20 system. A new player, but experienced in war games wanted me to show him a full scope of the game. So I prepared a blue force for him and a red one for me. PanO more shooty shooty like and Nomads with their tricks, to show off painted models and TAGs as center pieces. And I even managed to give him an opportunity to hide a Lieutenant from me.

Sadly I forgot to take deployment pics, but from my side it looked more or less like this:

Chimera on my right side, with Evader on the top of the building in front of her, standing upright ready to take some shots with his Panzerfaust. Moran in front of them ready to Code the Console.

Sadly I put my Zondbot near the Chimera, instead of the other side of the DZ. On the far left Sin-Eater and Pi-Well were covering some firelanes with Zondnautica behind them, ready to strike. Zoe was hidden on top of the building near Pi-Well and Custodier was hidden behind the Evader. KHD Zero took place near my 2nd Console to code. Obivously my Szally is in reserve.

PanO decided to hide their all Fusiliers near S6 Camo Marker on my right flank, all prone and vulnerable to attacks from the middle of the table.

MSR Nisse behind them, but also in Prone.

Knight Of Justice closer to the middle part of the table, but still in Total Cover.

Orc with Feuerbach was on the far left in Prone, ready to pop out in case he get an opportunity.

Warcor somewhere close to the middle, but also completely hidden.

Karhu in the middle with Palbot near Orc.

Nokk was left in the reserve.

Szally landed in the middle of my DZ ready to strike all angles and Nokk took place near the Orc.

Zondnautica pushes forward to engage Nokk in a good range for her and to avoid Nisse and after 2 Orders the Nokk is Unconscious. I thought with a few orders I could take out Nisse and one of the Fusiliers so I push Szally to the middle only to realise that Nisse is Prone in Total Cover, so I just pop out to miss all my shots on the Fusilier and then finish her off in my next Order.

Now I let my Moran do some talking and he pushes to the Console and puts out a Coala forward. He then proceeds to need 4 rolls to activate the console…

Then with few orders left I leave my Szally in suppressive Fire next to my 2nd Console.

PanO takes up solving problems one by one. Karhu tries reaching for the Console with Palbot, but Palbot misses the roll and dies to ARO. Orc takes out Zondnautica and moves towards the Console.

Then it’s Uhlan’s time! He takes out one Koala, gets to the middle and tanks a Koala while taking shots at Evader and Moran. Evader gets hit and goes prone and Uhlan gets Targeted by the Hackers (I’ve decided to not use all the super mean programs like Total Control or Oblivion since I didn’t give PanO any KHD devices).

Then Uhlan falls back, failing to do anything to Moran and takes a shot at Szally, but again does nothing.

Next up was a gang up! Coordinated Order with Uhlan, Orc, Karhu and Fusilier. They Move all towards the firepositions of Szally, but only two of them (Uhlan and Orc) manage to get LoS. Szally gets 2 Wounds in the face, and Uhlan takes a Wound from her.

I think the previous turn ended there and I see on the photos that somewhere along the way I also moved my Camoed Zero towards the 2nd Console, probably Coordinated order with one of the Szally Moves (maybe even with Moran). We were running out of play time so I made this one fast. Szally broke her Suppressive Fire and tried shooting Uhlan. In return she received a Feuerbach hit and got Unconscious. My 2nd try was to Coordinate Sin-Eater, Evader, Moran and Pi-Well to shoot at the Uhlan. This ended up with my Evader dying and no scratches on Uhlan.

My third attempt was to bring Chimera. It was a super yolo run, instead of throwing smokes I was shooting 2 bullets at Uhlan and 1 at the Fusilier in the back. This ended up in my favor as Chimera never got hit and on her 3rd Order in view of the enemies she engaged Uhlan with all of the Pupniks.

I ended up hitting Uhlan 4 times (including one critical) and lost Chimera and one Pupnik in the process. It’s hard to survive 9 hits even as a TAG.

Pi-Well activated the 2nd Console on his 2nd try and I don’t really remember what happened to that poor Orc with Feuerbach, but I see he was Unconscious when I was taking photos.

Last minutes to play turn 2 for PanO was to Code at least one Console. Warcor tried her luck, but died in the Process. Then Karhu with his last Orders got to the Console but didn’t manage to Code it (legendary PanO WIP had its role here, as he rolled 13).

We didn’t play the last turn as we had to leave the store, so we closed the game after 2 Rounds.

In the end I had 2 Coded Consoles (2 OP), PanOceania had 0 (1 OP for me) and I had 2 OP for Secondary Objective while PanO had 3 OP – I think Szally got shot on her active turn when trying to take down Uhlan and Evader in the Coordinated was shot by the Fusilier, and for PanO all three situations happened near the Console (Palbot, Warcor and Karhu were all exposed to my ARO when trying to Code the Console).

I like the 20×20 system for its simplicity. All missions fit on 1 page and now sometimes require some fixing to fit the N4 rules, but in N3 they were perfect for some casual gameplay. 20×20 has its strength that basically every model can do the objectives (contrary to ITS, where most of the specified objectives can be accomplished only by Specialists) so many more profiles are viable, while still some of them get bonuses for being tailored to the roles (like Hackers and Engineers getting +3 bonus instead of -3 penalty to Coding the Consoles). I think I will use this system more for casual games, especially when playing with less experienced players.

I still wish I had a chance to play some YAMS or TACOS, but that’s gonna have to be taken care of in the future. I might even organize an event using one of those systems as a break from omnipresent ITS scenarios.