Yaogats are the hunters among the Morat Aggression Force. They are characterized by their Multispectral Visors, allowing them to see through smoke and camouflage with ease. Despite not being a popular choice, I find that they are a valuable addition to Vanilla Combined, as well as MAF armies.

The base profile is fairly standard for Medium Infantry, they Move 4-2, and shoot with a solid BS12, while ARM3 provides a decent amount of defense. The piece of equipment that defines Yaogats though is their Multispectral Visor L2, which lets them see through smoke, and not suffer any penalties from Camouflage, TO, ODD, etc. The only downside is that MSV2 doesn’t come cheap, so these are some fairly expensive troops.

Combi Rifle + Panzerfaust. Normally a Panzerfaust can be a risky piece of kit to use, only a single burst, meaning you are often going face to face with a single dice per player. When you factor in the MSV2 however, you can now protect yourself with smoke, inflicting that extra -6 for your opponent to shoot back (most of the time). The combi rifle gives you a decent short-mid range weapon, that isn’t anything spectacular, but when combined with the MSV can still be a deadly tool. I often take this profile as a Lieutenant in MAF forces, it gets a slight discount on the SWC, and can use it’s lieutenant order to deliver a Panzerfaust at an opportune moment.

Boarding Shotgun, Grenades. I love this profile for the same reason I love this kit on the Maakrep, having MSV2 with a shotgun lets you get up close and personal with enemy camo markers, discovering them through smoke, and blasting them off the table. The added PH12 of the Yaogat makes it even more fun, letting you land speculative grenades on 9’s.

MULTI Sniper Rifle. There’s nothing wrong with a MULTI Sniper, able to act as an ARO piece when needed, and also a brutal active turn weapon. The only downside is that in vanilla, it’s competing with the Maakrep, which is a point less and comes with an automedikit. In Morat armies though, it’s a great choice to get a MSV2 sniper on the table.

Spitfire. My favorite weapon to come with this great MSV2, when your enemy is facing down a high burst, long range weapon, they’re going to be sad. Toss smoke on top of this guy and he can mow down enemy troopers without Sixth Sense with minimal effort. Whether I’m going for a solo Yaogat, or a fireteam, this guy is always around.

Combi Rifle, Grenades, EI Hacking Device. The only specialist choice in Yaogats, this is kind of an odd duck profile. The combination of a combi rifle and grenades is really fantastic, and I wish I could get that gear set up on a non-hacker, but oh well. The EI Hacking Device comes with Sucker Punch, a B1 hacking program, which makes me think it’s better to use during ARO than the active turn, as well as the normal suite of hacking programs. To get the most out of it, you should be using it’s array of programs to support remotes, and slow down enemy HI/TAGs. All-in-all, it’s an expensive profile that may be too versatile for it’s own good, despite having a great combination of weaponry. 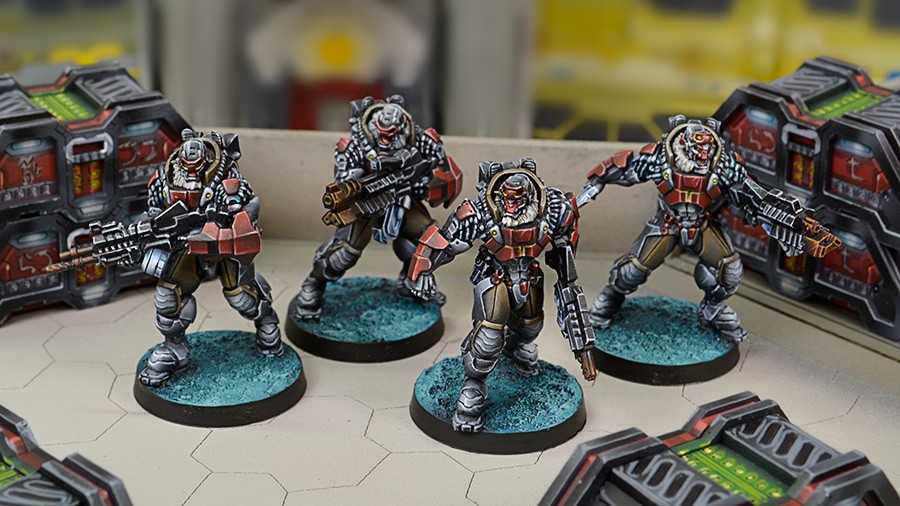 Like any MSV2 armed piece, Yaogats are best when shooting through smoke with minimal repercussion, and taking out enemy troops with equipment that inflict BS modifiers. In vanilla, they compete heavily with Maakrep, who have similar equipment, so I like to look at what differentiates them. Yaogats get panzerfaust and spitfires, both are extremely deadly, especially when combined with all the various smoke sources available to MAF and vanilla combined.

In MAF forces they obviously have no competition from other MSV2 troopers. This is when you’ll be looking at the MULTI Sniper option, and fireteams. As a full core fireteam, they can be prohibitively expensive, and can be utterly ruined by facing an army with access to White Noise, I do really like them in a Haris though, thanks to the Raktorak. A 3-man team of spitfire, combi + panzerfaust, and a Raktorak (whichever profile floats your boat), gives you a moderately priced fireteam with respectable firepower, which is further bolstered by the incredible smoke coverage you can get in a MAF army.