This is my second attempt at doing this bromad mission. First time I had a Ragik Spitfire, and there was too juicy of an opening on Turn 1. So this time, I brought 2 options, a Nadhir that I placed defending my HVT that I suspected would reveal fairly late in the game to ARO, and a Bashi Bazouk, whose order I wouldn’t miss, and could walk in and clean up whatever he could on Turn 3. 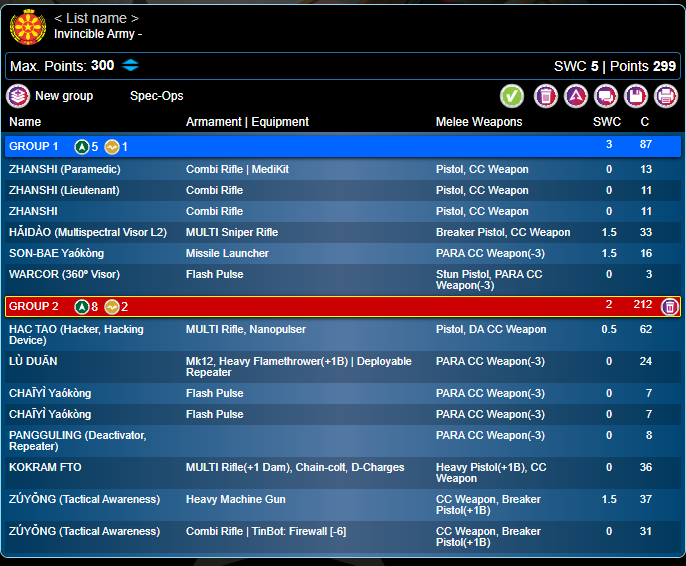 I was deploying first, so I spread out my HVTs so I could pick the real one at the end, once I had more info (not sure this is the correct way to play this, but you choose the real one “during deployment”, so that’s what we went with.) I had my Kum, Daylami, and Ghulam hackers spread out to get coverage of their various tools, Rafiq on the right next to a Nasmat, ready to go in the far right door, missile bot fairly central, looking into the central door, Nadhir (pictured below, but in Hidden Deployment) behind him possibly baiting a double ARO, engineer tucked in the back, and on the far left had the Hortlak watch a very close lane with his Blitzen. Wanted my CoC to be safe, but was ready to throw the Shakush where I needed him. (Shakush and Fiday were my reserves). Saladin, was very forward in the center, ready to tuck into that corner and cover that hallway with his repeater.

During his deployment, he also had his HVTs spread out. His fireteam was mostly prone in the pit off to my right, except a Sniper in the back corner watching some long diagonal firelanes. He also had an “EVO bot” in the pit, but that turned out to be the Lu Duan. Also in that same room, on the left-most wall watching the entrance was a flashpulse bot. In the middle was his Zuyong and Krit (who was his reserve) Haris, his Hac Tao was as far forward as possible, ready to catch anything that got too close, and his warcor, second flashpulse bot, and baggage both were on the far left, covering that advance.

In the above picture, you can see where my friendly accountant went. Completely out of LoS of everything from being prone and the column blocking the flashpulse bot. I tossed my Shakush in the middle, to get some good Ramboing going, and he put Krit down, to fill his Haris.

My Kum bikers pushed forward and laid down some smoke, and the Fiday took the Haidao off the table, but got stunned by a flashpulse bot for his trouble. The Shakush pushed forward, taking out that very same bot. (I probably should’ve done that in the other order.) The majority of my army pushed up further, and I ended the turn with Shakush and Rafiq in suppressive fire, watching large amounts of the table.

His EVO bot multiplied at the beginning of his turn, so I know it was a Lu Duan. He decided to try to remove my Rafiq and Fiday. After 8 orders, both his HMG Zuyong and his Lu Duan ended up unconscious, and my Rafiq was dead. Fiday stuck it out, though. He spent the rest of his turn paramedicing his HMG back up, failing at repairing his unconscious flashpulse bot, and setting people back up to ARO.

Kum moved forward again on their impetuous, one losing a f2f with the warcor, but tanked both flashpulse saves, the other setting up smoke on the center console. This allowed my Shakush pilot to safely pop out and push a button, and the kum biker killed off the decoy in the center. Then I pushed the Shakush forward and took out one of his Zhanshi. Turned out to be a good call, since that was his lieutenant. I then wandered over to the left console and flipped the doop with the Shakush, taking out his warcor on the way, revealing the HVT by the Fiday, who was the real Designated Target. I did a Coordinated order, had the Fiday get in Silhouette contact with the Designated Target (provoking many AROs), and moved up a Ghulam and the Shakush. This is when he revealed his Hac Tao hacker, and tried to Total Control the TAG. I let that happen unopposed, and punched the DT unconscious. Fiday was blasted off the table, but the Hac Tao managed to whiff his roll. I then moved the Shakush, trying to get shots on him, but I was just short of the movement. Again, he whiffed his Total Control. Last order of the turn, I walked through his LoS, and threw a flamethrower on him.

He’s in Loss of Lieutenant, but has a few Tac Aware orders to mitigate that. He spends one and it’s irregular on the combi Zuyong to get my Kum in the center to Dogged. His Baggage bot tries to tie up the Kum in CC from behind, but the Kum succeeds at his dodge. Krit fires some shots at the Shakush, but the Shakush crits, dropping him unconscious. Hac Tao then attempted to Total Control the Shakush again. This time he gets it off, Possessing the TAG, but takes a wound from the flamethrower. He then took his Zuyong and crit my left Kum off the table.

My opponent finally had my TAG, but I had Command Tokens left, so I took it back. He had forgotten that was an option. I used Strategos to move the Bashi into Group 1 (as was planned from the beginning), and started looking for a good place to use it. Unfortunately, my plan expected him to have advanced out of his deployment zone by Turn 3, but I was attacking so hard that he hadn’t. So I didn’t have a good spot to walk him on to attack (Exclusion Zone didn’t really help, either), so I just popped him in on my side to provide an ARO down the hall that my Designated Target was behind. I moved the Shakush to shoot his Zuyong HMG, and tanked an oblivion. I double crit the Zuyong, blasting him off the table. I then moved one of my Ghulam Hackers up, trying to deal with the Hac Tao in a reasonable way. I, of course, crit, and Isolated the hacker. I then Imm-B him, and then tried punching him with the Shakush… I think I probably should’ve used my heavy flamethrower.

His first order of business was sending his Paramedic to his unconscious Designated Target, in order to revive it. I wasn’t 100% sure in the game, so I didn’t correct him then, but I’m pretty sure a Designated Target is neutral to the player who placed it, and a Medikit can only be used on Allied Troopers. In any case, in our game, he revived his DT. He tried sending things to press the consoles to get some points on the board, but my Daylami did enough work to stymy his efforts.

I got pretty lucky in this game. His first turn was almost completely nullified by my Rafiq and Fiday. Both were rolling crits like it was going out of style. The Hao Tao whiffed two Total Control attempts and I tanked a third. I crit his Krit off the table.

I really should’ve tried to deal with his hacker much earlier. I used the Shakush, giving him way too many chances to do something to him. Hacking, and dealing with hacking, is definitely one of my weak points, tactically. A large portion of my games are with Tohaa or Shasvastii, neither of which I brought much hackable things in. But with N4 bringing out all the HI and TAGs, as well as hacking being relevant to all troop types, it’s something we’re all going to see more of.

Unfortunately, this particular game I was attacking too successfully, trapping him in his deployment zone, preventing my Nadhir from popping out to ARO, and not allowing openings for my Bashi Bazouk, making the Bromad Academy mission a little moot. I do really like the Bashi Bazouk in a 2nd group with Saladin to move him over for free. I probably should’ve done something similar with the Nadhir, and fit another regular order in my 1st group.