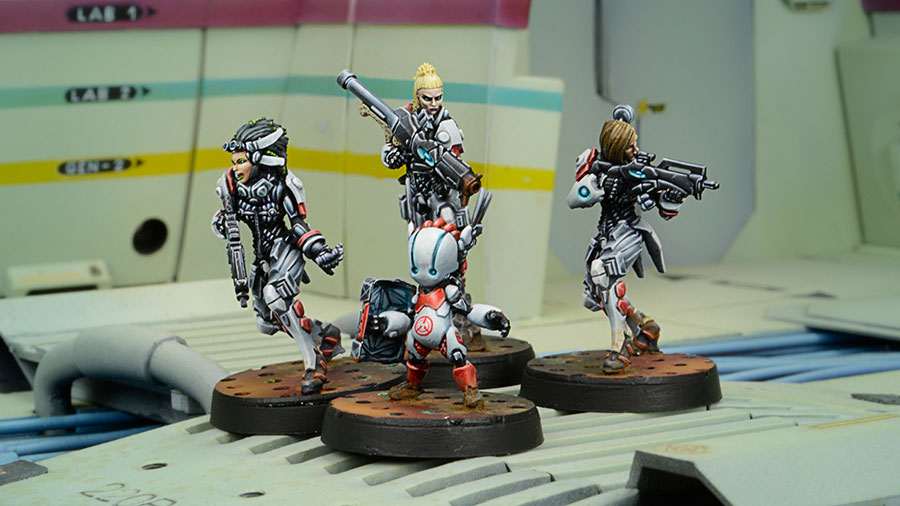 My idea was to have a Core patrolling half of the table, while Sin-eater takes care of the other half. Reverend Haris with Vostok was supposed to take the room. Vostok and Kusanagi were supposed to be a pain in the ass for the opponent and if they ever ran into a MSV user I had a Custodier lt waiting to turn on the White Noise. Combined with higher ARM values on Moiras, Riot Grrl and Vostok, all of it was supposed to cover basic weaknesses of ODD (or Mimetism -6 as some call it now), which are Direct Template Weapons.

All fun and games on the Haqq side. ML REM in the middle in full cover. Zuleyka on the left. Tons of Daylaim in camo all over the place. Zaheydan covering the right side with FO Hunzakut near the console. Liberto is also in the middle and Barid is prone on the roof. One of the Saladins is next to the Barid and the other in the corner. Hawwa near left console and Mukhtar on the left edge of the table.

First I set up Sin-Eater in the middle of my DZ to cover as much as he can and Riot Grrl with Core of Moderators on the right, where all of them could get cover. Custiodier got set up on the left with Pupnik covering the approach to her and Chimera below on the ground with the remaining two Pupniks. Transductors were covering narrow corridors and Morlocks were defending the approach to Chimera and Fireteam Core. I’ve put down Haris at the back in the middle so they have more flexibility on my turn.

Start was easy. Al-Djabel next to my Sin-Eater just proceeds to kill him with his Viral CCW.

Mukhtar is next. He doesn’t need smoke from Zuleyka because my Riot Grrl would see him anyway so he goes alone and tries to take out a Grrl. First he kills Morlock covering the table edge and then Mukhtar wastes a good few orders trying to get her, but he doesn’t even get a single Wound. Then he decides to double back for a better position behind a building.

Another try was of 3 Dylamis to shoot the Riot Grrl, but one of them dies, another one misses and she manages to survive 2 of the 3 ARM saves from the third Panzerfaust.

Al-Djabel goes back into Impersonation state and Haqq’s turn ends.

I have 2 attention seekers near my DZ and that’s my plan for the turn. I open up with a Morlock reaching Al-Djabel, but fail to Discover him.

Following this, my Riot Grrl tries to clean the air and goes for the Daylami on the center building in Haqq’s DZ and deletes him.

All that was to make sure my Haris has a safe approach to Mukhtar. However, when I was getting close a FO Nadhir appeared near dead Daylami and tried his luck with Flammenspeer. He missed while my Haris was Dodging and then got deleted by Riot Grrl.

I miscalculated and moved Vostok in 8” range of Mukhtar while still out of LoS so he tried to Dodge out of sight, but failed. I set up White Noise with my Custodier and tried shooting him, to which he Dodged, this time successfully. Then Zuleyka got to be a target and she survived too. My turn ends with these bad shots.

Mukhtar gets to be a hero again. First, he kills the second Morlock near Al-Djabel and then pops out on the Vostok and shoots him down to pieces. My ARM 6 in cover meaning nothing with 1, 3 and 11 rolled against his Red Fury. Zuleyka then approaches Unconscious Vostok and puts her Flamethrowers into use, but gets shut down by ARO.

Haqqislam spent the rest of the turn preparing to stop me from taking the Objective Room. Hunzakut and Al’ Hawwa activated their consoles and Hunzakut got to the right OR door, planted a mine and stayed there out of Riot Grrls sights. Al Hawwa approached my right console and hid behind the building.

I pushed my Transductors to more active positions. One was left observing Al-Djabel and the other took care of the right table side. I finally put Kusanagi where I wanted her. She got to the OR from my side, tried to kill the Hunzakut but failed, got shot, Targeted and started Suppressing the Objective Room with her Spitfire.

I didn’t manage to secure the room so Haqq had an easy job of doing so, they only had to take out Cassandra. ONLY, right?
Al-Djabel pops out on my Transductor and gets both stunned by the Zond and Targeted by my Custodier through the Repeater.

Hunzakut again leaves a mine in his door and Daylami gets inside from the center, but neither he, nor Cassandra manage to hit anything.

Hunzakut gets back inside, but more of his base is outside the room than inside.

And haqq leaves it at that. 2 OP for them for controlling the ZO and 2 OP for having more consoles activated at the end of turn 5. Also, Al Hawwa tried to activate my console, but failed.

I finally move my Uberfallkommando, but they only get shut down by the Zhayedan short of my DZ. Cassandra gets killed trying to take the OR, but Riot Grrl kills the daylami inside. My Core has to take care of the business once again. While they rush towards the objective room they get targeted and shot by the Al Hawwa near my console, so eventually I push the Reverend Healer (also got Targeted on the way) and blast him with her EXP CCW (one of my favourite thing about Bakunin are the Healer-Killers with their EXP CCW and high base CC, and after 4 years of playing it was a first time for me to actually use it).

Moderators get close to OR, but I didn’t have enough orders left to actually control it.

Sooo, I had 1 or 2 Orders in the second group with Transductor and managed to park it in one of the corners of the Objective Room.

Moderators use last orders to activate my right-side console.

The console itself didn’t change the result, so I got 2 OP for OR and Haqq got 2 OP for consoles and 1 OP for killing more Specialists.

I wasn’t sure I would use this game for this month’s mission, had a good idea on what I want to achieve in the game itself, so I took a shot with 3 ARM list focused around Haris and Riot Grrl, but as always my plan got messed up both by me and my rolls and I didn’t get to play any other game this month. Brave Riot Grrl stood up to her task and got shot down once (I don’t remember exactly when, could be turn 1), but got healed by one of the Paramedics, back into the Core and kept shooting throughout the game. My friend had to keep her in mind all the time and each turn he had to take a worse route of angle of shooting because of her. As always Riot Grrls proved to be worth their price.

Vostok and Haris on the other hand were a bit of a letdown. I loved running Kusanagi with Custodier in N3, but White Noise now only lasts until the end of the turn and can be played only actively. So no more ARO blocking those pesky Intruders that can’t get rid of a Pitcher/Repeater below them. And I expected Vostok to be able to take way more shots than he did.
I think I will tweak the list a bit and will have more fun with the Haris + Custodier itself, because it could be a sweet problem solver.

On the other note, I had a decent game that ended in a Tie probably all thanks to a SWAST Taskmaster in cover (it was featured in my 032 Mission Report) that stood a whole turn up to an enemy trying to dig him out. He was making all the saves and my friend was getting very upset about that. So yeah, armor with new critical hits works like a charm.

There’s one last thing I would mention that makes me sad in all of this. Limited Insertion both as a format and as a 1 Combat Group list protection got lost between N3 and N4 so running a lot of armored units in armies that don’t have access to Tactical Awareness and NCO (like Invincible Army does) makes you start with 8 Orders and that’s a big deal when enemy has easy access to twice as much.