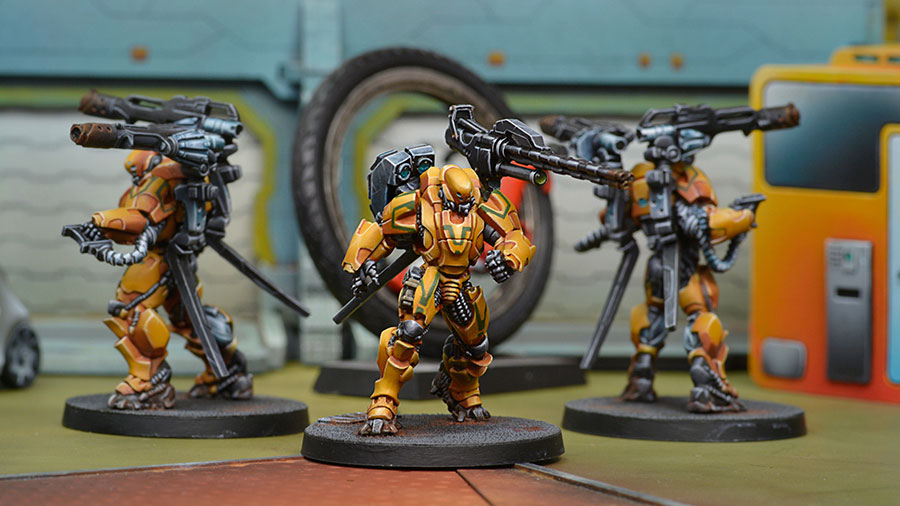 An odd mission, but fun one nonetheless. I invited my friend Furiat to join me in this madness which ended in using whatever we don’t have in our parent factions.

I’ve started my deployment with setting up ARO pieces. Yan Huo to cover my HVT, Lunah to his left to cover the middle and a bit of the right side. Long Ya to cover Daoying on the right flank.  Libertos in the middle to turn on SF and leave him there for the rest of the game. Krakot on the left side near the ventilator piece to cover Lei Gong. Su-Jian was left in reserve and landed on the left side to attack Kriza’s position.

Unfortunately I’m missing Nomads deployment zone. General idea was to spread Jaguars, Puppets on one flank, Kriza in the back in the middle near Puppetmaster and Krakot and Intruder on the left side near one of the Jaguars on top of the big building.

My Krakot has cancelled his Impetuous. Su-Jian rushed forward, took out Transductor on the left with one of the Jaguars. Jaguar in the middle put down smoke, but it didn’t cover Kriza so my Su-Jian got into position and started exchanging fire with him for the rest of my turn. At the end Kriza was in Total Cover with 1 Wound (a bit closer to Krakot) and my Su Jian was in SF. I turned Controlled Jump on with my Daoying and put him back into Camo and then my Liu Xing jumped. Landed ideally unopposed on 3 models and a marker. Krakot and Kriza failed their Dodge rolls, Puppetmaster and Krakot failed their ARM saves, Kriza survived his and Liu Xing took a mine to the face. Lastly Libertos went into SF.

Nomads on their turn decided to take care of Su-Jian. Hellcat with a Shotgun popped up behind him from the table edge, walked up and shot him dead. Jaguar covered Intruder in smoke and Intruder proceeded to take shots with Yan Huo. It ended with one wound on Yan Huo and eventually Intruder took a Crit to the face. Next Zero appeared from Camo near my HVT and shot her down while taking fire from Yan Huo, Krakot and Lunah. Then Hellcat decided to attack my Lei Gong but died on the way from Libertos with SMG in SF mode.

I started with Lei Gong getting to midfield to shoot down the Jaguar near Kriza, but he managed to smoke the corridor. Again… Next up on the table was Krakot. He didn’t need to cover my Lei Gong anymore and with his 6-4 Movement and Super Jump got across quite fast. He killed HVT on the way and then he got through smoke and put some Pistol shots out. One into Kriza and one into Lunokhod further away. Kriza shot him dead with a Heavy Pistol and Krakot missed his shot on Lunokhod, while Lunokhod put his Koalas into Stand By (he might have done it sooner, like in ARO to Su Jian, because I recall taking of them out with something).

Counterattack was swift. Kriza took a shot at Lei Gong at which he took a Wound (into the NWI state) and then Lunokhod started crawling up the field to finish Lei Gong off with his Flamethrower and be taken out by still standing ARO pieces.

Liberto decides to attack. At this point I think he manages to survive a Koala, climbs up the container to get closer to Kriza and avoid Jaguar in the middle (he might have exchanged shots with a smoke grenade – I’m not sure!) and gets shot down by a Jaguar near the Intruder on top of the container. I decided to move Lunah to a different position to get a better angle at possible advance. At this point we both had our Designated Targets killed (not by Datatrackers!) and there was no way I could finish off Kriza.

Jaguar goes forward, and manages to put down smoke in front of him to dodge Yan Huo missiles. Lastly Kriza went up to the container to get Yan Huo in LoF eventually taking him out with last Orders. 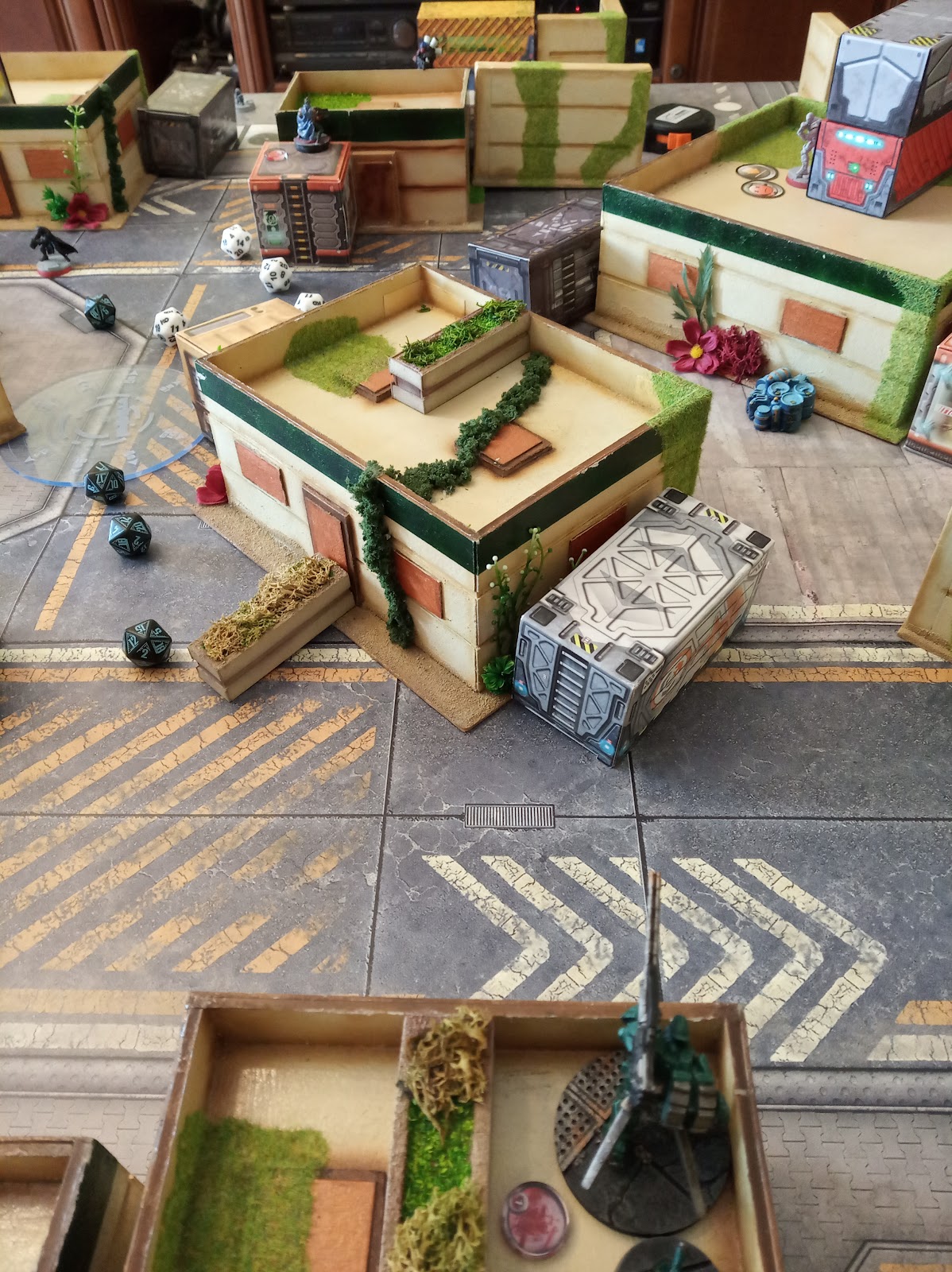 It was close. Super close. We were both at 2 points for killing Designated Target and Army Points would break the tie. We’ve counted them up and it turned out I’ve had 96, while Nomads had had 86, so it was

There were some heavy hits on both sides and some recklessness on Nomads side. It was a really nice experience to finally put down on table something different than what I have in Nomads. Yan Huo was a heavy hitting, reliable and hard to take down ARO piece. I would have probably fared much better, if I put Hundun instead of Lunah because of her HRL profile, but I really wanted to see what she could do. Su-Jian did his job, but failed in dice rolls (though I didn’t use him to his full potential). So did Liu Xing that I took to do some Lt hunting, who eventually took out Puppetmaster and almost took out Kriza. His jump was kind of a game changer.

Furiat (Nomads player) did the best he could with his kit and in the situation he was in. Hellcat wasn’t too reckless, but I have almost forgotten about my Liberto’s ARO, and so did he.. That ended his happy run.
All in all, I’m satisfied with this game and this month’s mission overall – great idea to try out other factions from time to time. We even planned to play again with the same lists, but playing our parent factions to see what we would do with them being more used to profile and what they can do, but eventually we didn’t have enough time for that.