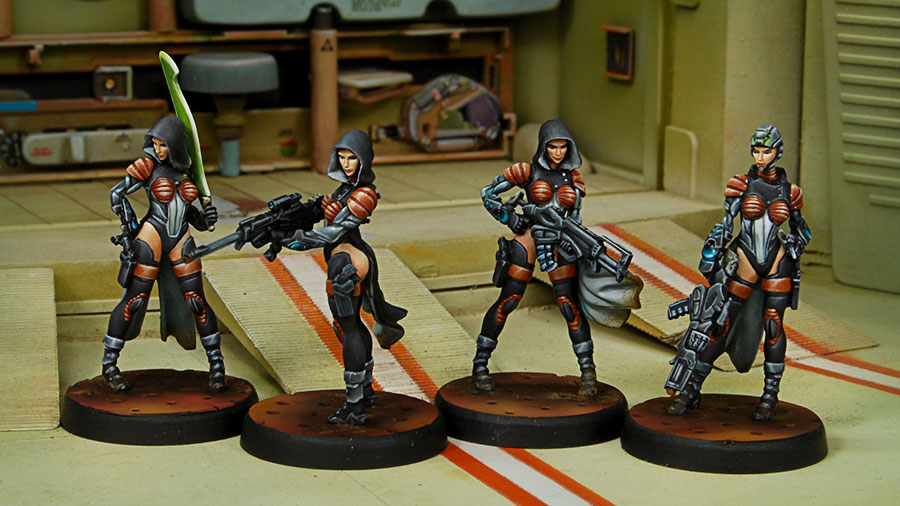 Jurisdictional Command of Bakunin vs Starmada

Hello everyone! It has been a long time! I haven’t played a game in over 5 months, and the last in person game I played was in March. Once in a lifetime circumstances, huh? Anyways, this was my first game of N4! I was excited to be able to try the new rules and the new ITS mission: Panic Room. My opponent for this game was Xammy, a consistent and fun opponent for me.

As an extra bonus for this game, Wisekensai from Bromad Academy has a mission “New Year, New Leaf” where we are supposed to try a new changed profile from N3 to N4. My selection for this mission in this game was the Reverend Moira Multisniper. In N3 I was always a bit down on the Reverend Moiras and hardly ever used multi snipers. Let’s see how she did for me.

For Panic Room and other “end of turn” or “end of game” I prefer going second, so if I win I will choose deployment and have my opponent deploy first. This usually results in the outcome I want. But if it doesn’t I tend to get free reign of the board on my first turn. For this game I did get my way.

Since this game was on Tabletop Simulator, I did not get my normal good shots of deployment.

Our table was modified to add in the panic room. I had Xammy deploy on the far side of the above picture. Xammy had his links centered on the truck with Hector ready to lead the charge forward. A Nyoka HRL on top of the building to the left of the trucks was one of the main players of the deployment. There was a Varangian on either flank, and a Lawkeeper on my left flank. Everything else was just kinda there.

I had my Morlocks on the far right and left, guarding against AD troopers that turned out not to be there. The building on my right contained my core team and Zoe. Pi-Well hid behind the angled truck on my left side. I set up my Reverend Haris on the right side, the Reverend Moira Multisniper was my reserve and up on the building, ready for obnoxious AROs. I had one Zero on the left building watching where the Nyoka would be. The other Zero was up on the right bridge, both Zeroes made their confused rolls.

To start things off, all of the impetuous models move. The Moira attempts to take out one Varangian, but fails. The Lawkeeper and other Varangian have free reign on their side of the board. Xammy realizes that he has left Hector in the open and that my Moira will shoot him. So he has Hector move prone and try and shoot back. I hit with one DA shot, but Hector passes all his rolls. The Nyoka then wins a fight with my KHD ghost taking it out. I think my other Zero dies here as well but honestly I can’t remember. Both Zeros died with little consequence to Xammy’s side. The lawkeeper zooms around the edge of the board to pick a fight with my left Morlock and Pi-Well, managing to knock Pi-Well unconscious. Getting really far forward. As a final thing Xammy brought two Nyokas into the central building.

For this turn I needed to clear the central building and ideally get something in of my own. I swapped my right Morlock with the Meteor Zond. My left morlock walks forward and sets up some smoke to fight the lawkeeper. The right morlock moves/moves to get up towards the Varangian on my right. I attempted to drop the Zond into Xammy’s backline. Finding a spot out of zone of control and line of sight from all Xammy’s stuff. Sadly it fails and has to walk in on my left side. My left Morlock smokes up and CC’s the lawkeeper off the table, before walking in to attempt chain rifles at the Nyokas in the central building. After that fails a bit I have the ML Riot Grrl come forward and take them out, leaving the room empty. The Moira leads the Haris team out of the Biotechvore Zone with the NCO order, which I really liked being able to use. Usually in Bakunin my LT orders get unused. I have the Morlock on my right go forward and fight/take out the Varangian on the right before ending my turn.

On this turn Xammy brings Hector, a Blue Coat and a Psycops into the central room. Before doing that, the Varangian on the left side (the only one still alive) comes forward to try and take out my Riot Grrl and Moderator link team. He kills the Meteor Zond, and then dies horribly.  Hector manages to take out the Riot Grrl on his way into the room before setting up in a corner. Something takes out my Morlock, but I cannot remember what it was.

Ok, go time, Hector is in the room and needs to not be in the room. I spend a long time and a lot of orders setting up my Reverend Team to harass the reduced core that is in the Panic Room. I have the Custodier launch a Repeater into the Panic Room so I can lock up Hector. My Morlock dies valiantly while taking out a Psycops and Blue coat. My Moira takes out Hector, makes it into the room and clears out the Psycops. Leaving her as the only thing in the Room. The Moira dominating the Room and being Essential Personnel nets me two points this turn.

Having lost Hector, Xammy starts this turn in Loss of Lietenant. He spends his command tokens to make things regular, trying to get another Blue Coat and Nyoka into the room. Unfortunately the Reverend Moira is death incarnate this game and kills things while maintaining control of the room.

Already dominating the room I end my turn. (Losing Zoe because I was stupid and forgot to move her out of the Biotechvore Zone. Dominating the Panic Room again with an Essential Personal gives me another two points. Since I also almost completely wiped out Xammy’s Starmada I get the Victory Points objective as well. Which makes it a:

I would like to start by saying, I LOVE the new Moira’s. In N3 they were not my favorite thing to use; they were expensive and slow and a lot of their utility could be fielded by other options (Riot Grrls and Kusanagi). In N4, having NCO and a 4-4 move makes me certainly considerate of the Moiras; and on top of that, the ability to have a Riot Grrl be in a Moderator core opens up List building considerably to have points for a Moira. My Moira sniper exceeded every expectation I had for her. Adding her to the list let me feel like I had 3 extra orders over my N3 lists. With a 4-4 movement I don’t feel like they are slowing the list down. Her Mimetism -6 was pretty brutal to Xammy and even in the close range fighting with pistols she was dominating.

This was an excellent first game back into N4. I really appreciate Xammy taking the time to help me stumble through TTS and my first N4 game. It is good to be back.