It’s time for our mid-mission update!

Mission 005 – To Infinity and Beyond!

Here’s some background music for your reading pleasure:

For our mid-mission update, we’ve got some feedback from Natetehaggresar, who has been rocking his Hollow Men link for a few months now. So, without further ado, take it away, Nate!

I recently painted up a link of Hollow Men, and fortuitously WiseKensai decided to feature super jump in this month’s academy… 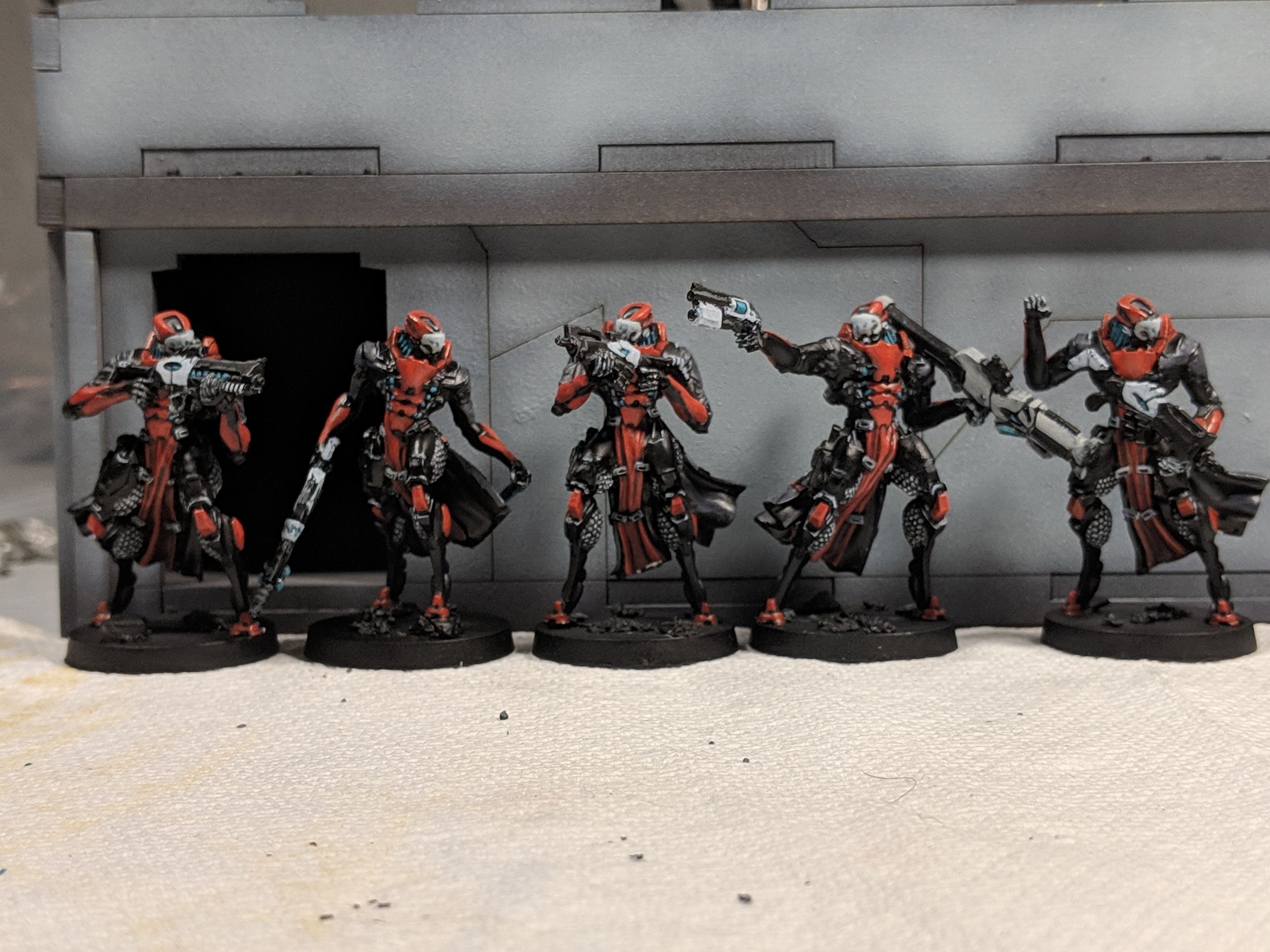 Prior to December I had been playing hollowmen a lot assisting some locals in Emerald City Incursion, in a Limited Insertion environment. I’ve since deleted by lists, but my primary observations are:

I also got in two games with the Hollow Men playing Frostbyte for TheDiceAbide’s birthday tournament. Jon (WiseKensai) wrote about our game here. I got paired against another local at the tournament proper, Xammy running NCA. Both games used the same list, since I liked it.

Both games had a similar flow. The Hollow Men early were able to dominate, using their the link mods to engage in very favorable exchanges. Against WiseKensai the board was fairly flat and I was able to do a fair amount of ML sniping to remove or significantly damage targets early on. The board was denser with some saturation against Xammy, early on in the game the spitfire was money, outshooting a AHD Swiss early in the game, then leveraging a saturation zone to engage a defensive Fusileer link at burst 4 to burst 1. (….way safer than 5 to 2 especially with MLs involved). In both games I think I over extended the link, in Frostbyte keeping your HI alive is really critical to control the central zone, and in both games I had fairly beat up links being picked apart late game by leaving them too exposed. I failed to follow my learning from earlier to use the hollow men’s maneuverability to retreat safely late in my turn. 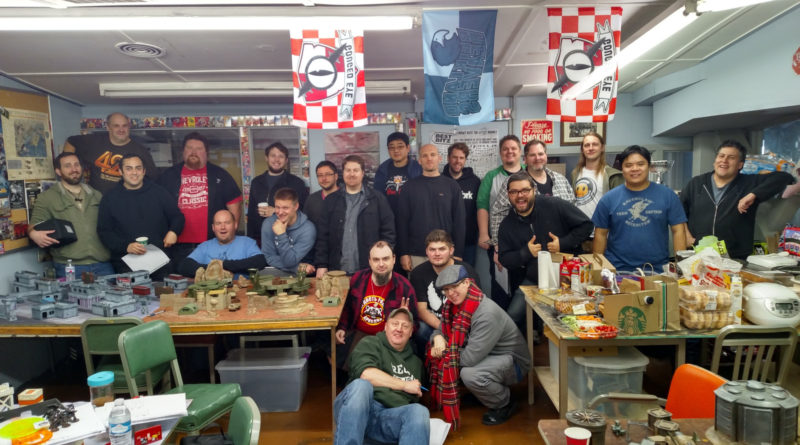 I played three games at Raindog’s Rampage (The prize is a freaking sword) on December 1st, using a Hollow Men link. The Hollow Men went undefeated, but a game using some Securitate ended in a costly defeat.

The format was 200 points, + spec ops. All the scenarios were home grown. If I was optimizing for ITS I would sub the Zondbot for a Warcor so I could use a command token to convert a 10th order each round. This event gave a lot of extra point for running fully painted, and my Warcor isn’t even started, so a bot it was.

My first game with them was against vanilla CA. The biggest two takeaways were that the Daturazi would be reliable trouble, and that super jump is awesome (we already knew that). The mimetism and high phys of of Daturazi throwing smoke caused me a great deal of trouble to remove, if my opponent had used them more aggressively they probably would have done significant damage to the link.

Second game was against JSA. The Stempler was a key player, using sensor sweep to reveal a hidden deployed Oniwaban. The burst 3 BS 22 shotgun (16 after TO camo) did a good job removing that threat. The spitfire Hollow Man did an excellent job cutting Musashi and a Tanko ML out of a link. Once those threats were removed the game was pretty much decided.

Third was against Tohaa running a Gorgos. The Gorgos didn’t have many good deployment options, and deployed in a manner that prevented him from falling back into total cover. I got first turn and 3 orders into a holloman ML the Gorgos had been blown up. The scenario was a variant of BTV, and the table had a large walkway complex in the center of the table. The Hollow Men’s ability to superjump (aka wall hack) made any sort of retribution pretty much impossible as they were able to jump up levels, but the Tohaa would have to spend piles of order moving to ladders, then climbing up, while suffering fire, or spending order throwing down smoke, but not having orders remaining to make meaningful progress. Turn 2 I had the Tohaa in retreat.

The Stempler is an awesome addition to the link. It add a lot of versatility. Sensor to expose HD ninjas is incredibly useful, as Hollow Men are so weak to melee, discovering on a 22 before mods is welcome as well. I generally prefer my links to have repeaters when playing Tunguska, and Stempler ticks that box. Triangulated fire was key in my Frostbyte win against WiseKensai too.

But the Stempler is also an Achilles heel, against Jon the Stempler got pinned down by the suppressive fire Ryuken and needed to be dropped from the link. Against Xammy he picked out the Stempler with a HD Hexa sniper in ARO–a Hollow Man would have been far more likely to survive that shot. The inability to prone is also a significant weakness, the Hollow Men can completely hide when on higher ground by proning, but the stempler needs additional terrain on top of buildings, or generally a large roof to block LoF. The walkways in my last game were to small to be able to obscure the Stempler. 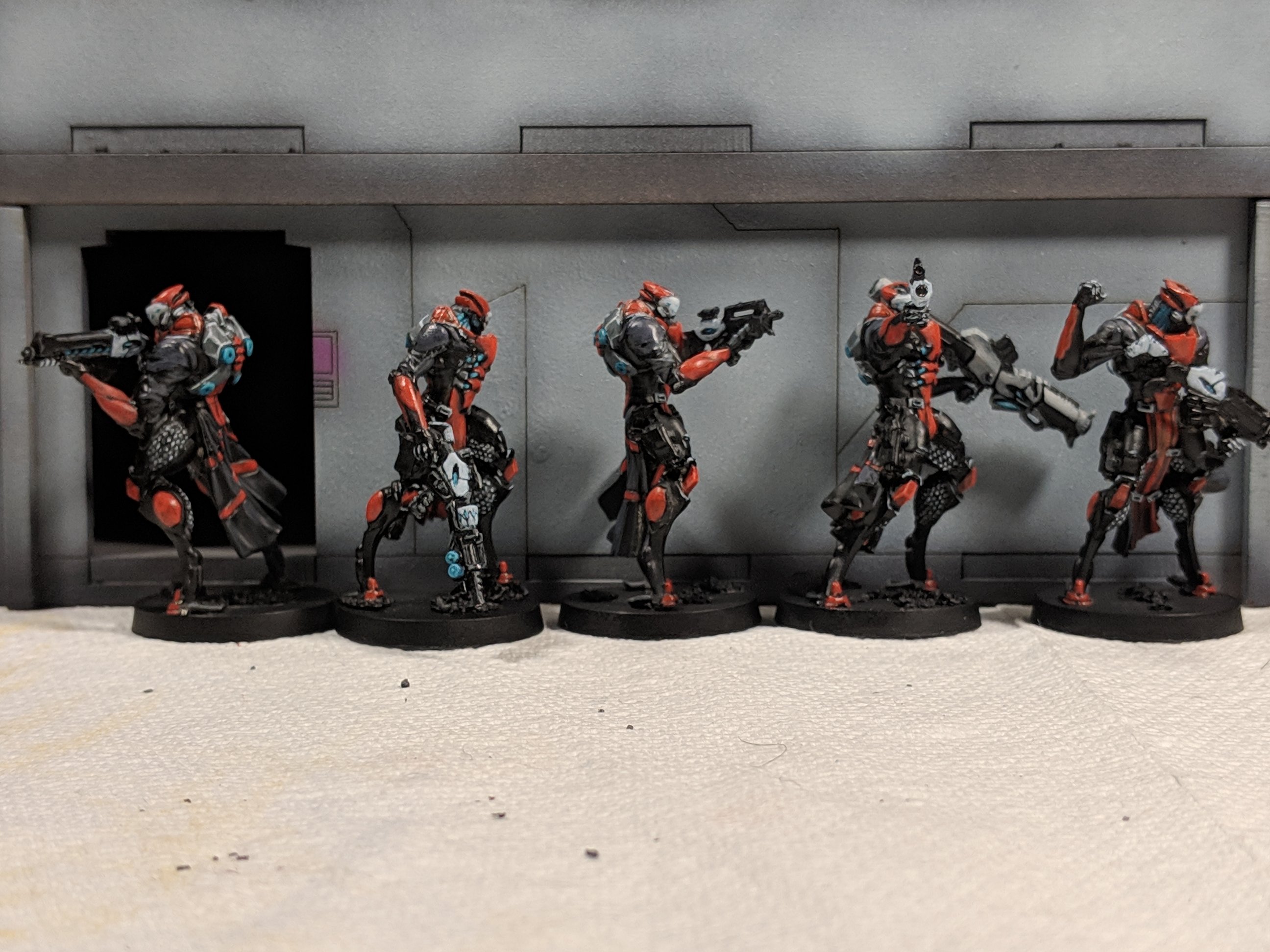 All the Hollow Men profiles appear worthwhile, just not for all formats. In the rampage I would have preferred the multi+pitcher to the combi, but points are a thing, and I didn’t have the points to make the multi fit, so I did the combi instead. As a solo piece I think I prefer the multi or the spitfire. The spitfire is ideal of pie slicing and isolating targets. The multi a little less so, but with the bonus utility of ammo choices, and a pitcher to augment your hacking game.

I have a little bit of a linked ML fetish, and the Hollow Men ML had been amazing, but again it is format specific. Linked ML’s lose a lot of their appeal in missions such as Power Pack where there is a sat zone that runs across the board. Similarly tables with a lot of saturation terrain decrease their appeal as linked pieces. (but increases their appeal as solo pieces because you don’t lose anything by not linking them)…